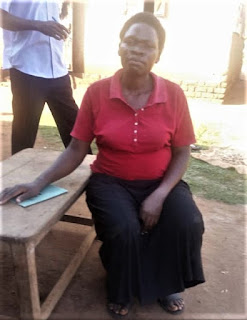 At the time, she didn’t know that sugar cane could be deadly.

As Ms. Kagoya and I chat on her recently swept veranda, we watch her two year old son playing under the mango tree. I sensed a bitterness arising as we begin to discuss her experiences with malaria more in depth.

Early in 2017, before UVP started working in her village, Kamira, Ms. Kagoya experienced complications during pregnancy. She was about 16 weeks along when she began bleeding. Because it was early in her first pregnancy, she had not yet had her first antenatal visit, so she thought the bleeding was normal, especially because she didn’t feel sick. “It all happened so fast that I didn’t know how I got to Bugono Health Center,” she says. She woke up at the health center to find out she had lost the baby. The nurse told her that she had high levels of the malaria parasite in her blood and that is what caused the miscarriage. The nurse also told her that she could still have more children, but she would have to change her habits.

Upon returning home, Ms. Kagoya and her husband began clearing the space immediately surrounding their compound. Sugar cane had been planted to the edge of the house and closely surrounded the compound, but after talking with the nurse, Ms. Kagoya now knew that sugar cane was a popular breeding ground for malaria. Because sugar cane is a lucrative crop, it is unheard of for a farmer to clear some area of the crop.

The bitterness I sensed at the beginning of our talk dissipates to hope and passion. She doesn’t want others in her community to experience the tragedy her family did, so she encourages others to take the education UVP provides seriously. She doesn’t want a mother to lose her unborn baby because of a lack of knowledge. “Lack of information can be very fatal,” Ms. Kagoya tells me. And she’s right.

*Ms. Kagoya’s story is shared with her permission.