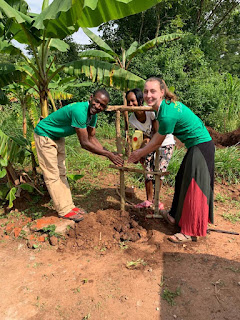 On our first full day in Naluko village, we met with our Village Health Team members (VHTs). These five community leaders are tasked with promoting general health within the community, despite access to scarce resources and no formal medical training. About an hour into our meeting, a voice called at the door, “Kodhi!” ‘Knock Knock!’ A man popped in and called one of our VHTs outside.

A couple minutes later, the VHT returned, exchanged words in Lusoga through choked tears, and left. Our Ugandan team leader, Sarah, translated, “Her father has just died.” It’s culturally expected that relevant members of the community attend funeral ceremonies, and so we learned that all of our VHTs would be absent two days that week, traveling to attend the burial. We expressed our condolences to the family and resolved to visit her upon return- as per custom, but then exchanged concerned glances, wondering what this would mean for our work.

The meeting continued and our excitement slowly rekindled. We learned more about our community and began to discuss our ideas. Then, we got to the chairman. The chairman is the head political leader in the village, and holds significant influence with community members. Initially, we planned to make personal contact with the chairman immediately, and request he set up a community meeting for us to introduce ourselves. The VHTs informed us that his wife was sick, but because the nearest health center was in Iganga Town, a far distance from the village, he wouldn’t be available to meet with us. Another obstacle. Yet again, we were called to be flexible, and adapted appropriately, resolving instead to meet with the vice-chair and other prominent leaders.

That evening, the woman we hired to assist with our food informed us that she would not be able to cook for us because her son was sick and she would have to attend to him. For the third time that day, the consequences of the health challenges we were tasked to address were directly inhibiting our ability to make progress.

Just as with most systemic inequity, the cycle begets itself. The lack of public health resources within the community was directly inhibiting our ability to provide public health resources to them. Western powers often adhere to toxic false notions about the realities of life, overlooking the complexity of solutions in low-resource contexts, especially in sub-Saharan Africa. Many people believe that healthy practices, such as washing hands or using hygienic waste management practices, are simple obvious truths with simple obvious solutions. This reductionist thinking fails to account for the cyclical nature of these issues. Interrupting a cycle is tricky business, involving active accounting for the consequences of the issues, while simultaneously preventing their recurrence. With a nuanced and relevant understanding of the issues at play, our team is excited to take on the challenges that lay ahead, regardless of the obstacles along the way. After all, this is what we’re here for.