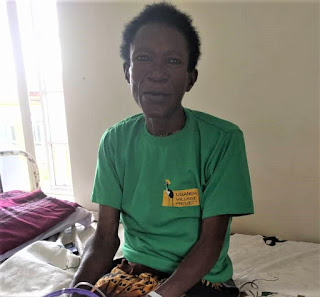 Her smile is comfortable and she looks beautiful in her flowered kitenge dress. Margret is happy to speak with me because she has good news to share: she’s healed.

Not long ago, Margret was not so positive and happy. Several years earlier, Margret’s husband passed away from AIDS. Knowing she was at risk, she went to test and learned that she was also positive. Because of the stigma surrounding HIV in her community, Margret lost her teaching job. She started working with The AIDS Support Organization (TASO) when she was diagnosed with cervical cancer. She sought treatment and received radiotherapy for eight months followed by a hysterectomy, but shortly after, Margret began to leak urine uncontrollably.  Margret lived in fear that someone at work would find the diapers she used to absorb the urine in her purse and shame her. Her coworkers began to complain of the smell, and as her condition worsened, it became more and more difficult to retain employment at TASO. She eventually left TASO and stayed with family members in the village, unable to provide for her family.

One week at church, a woman confided in Margret that she had suffered the same ailment and was going to receive treatment at the upcoming camp in Kamuli. The woman put Margret in contact with Loy, UVP’s Reproductive Health Program Coordinator, and scheduled a meeting. After learning more about the treatment, Margret agreed to go to the camp. “When I reached the camp, I felt so hopeful, and when the surgeons confirmed that they will work on, I knew my lifespan had increased,” Margret recalls. And knowing that she would not have much help to provide for her family upon her return, Margret signed up to join the reintegration program to learn tailoring skills. The tailoring instructor tells us all the time that Margret is a very active and excited learner!

Margret has encountered several challenges in her life, yet remains positive and is grateful for the support she received from organizations like UVP along the way.

*Margret’s story is being shared with her permission.