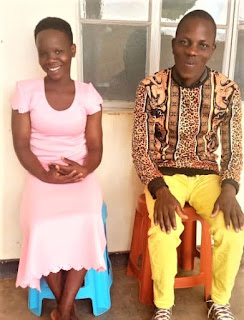 As we sit in the bright sunshine on the veranda outside the fistula ward at Kamuli Mission Hospital, Kevin’s excitement was palpable. She was proud to be selected to be interviewed, which made her more confident to share her story. With her husband, Daniel, nearby, Kevin tells me how she came to seek treatment for fistula.

Kevin was just 17 when she first became pregnant and, in the tradition of her family, she delivered the child with a Traditional Birth Attendant (TBA). After delivering, Kevin was in a great deal of pain and the herb bath the TBA prescribed was not providing any relief. After several months, the pain subsided, but she was still leaking urine. When Kevin and Daniel sought advice from TBA, they were told that is just a consequence of childbirth. Knowing in their hearts that there was a better answer, Daniel and Kevin decided to deliver at the health center for their second child. While Kevin and the new baby were recovering, there happened to be a UVP Fistula Ambassador, Jackie, sensitizing a group at the health center. After the presentation, Kevin approached Jackie and the two discussed Kevin’s symptoms, and Jackie suggested they keep in touch.

Months later, Jackie went to visit Kevin and talked about the upcoming fistula treatment camp. With the TBA’s advice that this was simply a result of childbirth ringing in her ears, Kevin was reluctant to attend the camp. It wasn’t until Daniel said he would escort her and act as her attendant that she committed to seeking treatment.

Now, after a successful surgery, Kevin is so grateful for that fateful day at the health center. If it weren’t for the Fistula Ambassador, Kevin may have never learned about fistula and could still be suffering. She and Daniel are both appreciative for the services provided to them and vowed to continue sharing their story with others who needed education about preventing fistula.