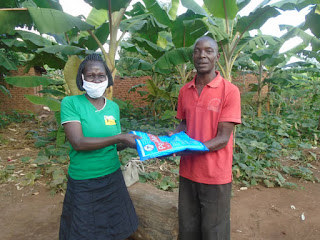 “My children would fall sick, one after the other,” Robert recalls. His wife and six children have spent a lot of time in the local health center. Between transportation to get to the health center and treatment for various ailments, Robert felt as though all his money went to treating his family’s health issues. UVP interns in Bulugodha changed his family’s path.

At first glance, Robert’s modest home is nothing spectacular, but upon touring the property, I can see the changes that have happened in the last year. I see a newer mosquito net and ask him about it. “I purchased that net from UVP. It was the first change I made in my home,” Robert remembers. It was shortly after a malaria sensitization with the interns that Robert began to understand that one of the reasons he was at the health center so frequently was to treat malaria in one of the eight people in his family. If the $1 net prevented just one visit to the health center, it would pay for itself.

After making the connection to health through a mosquito net, Robert began attending all the UVP outreaches to learn other small ways he could improve his family’s health and, ultimately, their financial situation. The next step was to build a proper latrine.

As he dug the deep hole needed for a proper pit latrine, Robert realized he could make bricks out of the dirt he was removing from the latrine hole. Since one of his dreams was to build his family a brick house to replace the mud and wood structure they currently lived in, Robert became even more excited to embrace these health changes.

“The health situation of my family made me a very poor man,” Robert says, “but since we’ve taken up these cheap solutions proposed by UVP, our health expenses have greatly decreased, allowing me to buy three more nets to have all of my family protected from hungry mosquitos.” I point to a pile of bricks, and Robert beams as he tells me that he has slowly been acquiring bricks and intends to build his family a new home next year, one with brick walls and a sturdy roof that doesn’t leak. “Thanks to the education from UVP, I have been able to improve our lives. I’m so very grateful. Mwebale emirimu, UVP [thank you for your work, UVP]!”

*Robert’s story was shared with his permission.