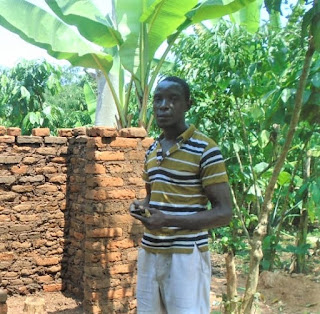 Seated under the nearby mango tree, I see the children touching the UVP motorcycle, in awe of the shiny blue metal vehicle. Next to me is Robert, father to the children ogling the motorcycle, looking at his children in amusement. I see a pile of bricks and some partially built walls in his compound and ask Robert, “what’s going on there?” as I point to the construction zone. “That,” he says, “is the beginning of our own pit latrine,” proudly smiling.

Robert didn’t think that sharing a latrine with his neighbors was a big deal until he met the 2019 interns who stayed in his village of Bulugodha. While it was great that the family was using a pit latrine, they said, did they really use it all the time? What happened if they went to use it but it was occupied? Did the children wait or just go to the field? These questions made Robert question how his family used the communal latrine.

Over the course of the interns’ stay and then in months after that, Robert and his wife learned more and more about the benefits of using a latrine and the safe water chain from UVP activities. As their knowledge grew, so did their desire to construct their own pit latrine.

Now, more than a year since the interns departed from Bulugodha, Robert and his wife are beginning construction on their own pit latrine. Robert acknowledges that it is a big investment for his family, which is why it took him more than a year to start the project, but he recognizes his family’s health as a priority. As we finish our conversation together, Robert says, “I feel so happy to be visited by the UVP team today – thanks for the good work!”