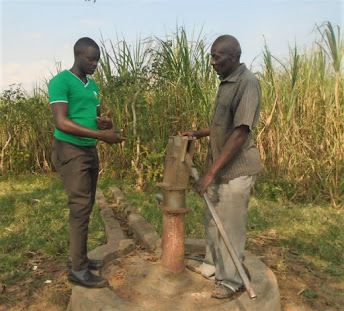 It was obvious the well had not been in operation for quite some time. But where were the people getting their water if the main water source in Kalungami B wasn’t working? Was this the UVP constructed well from long ago?

As though he heard my thoughts, I hear a voice behind me say, “Are you among the UVP team that constructed this well with our community?” I turned around to find Menya Patrick, one of the village elders in Kalungami B who cared for the well and part of the team who helped to construct it in 2015. I replied, “Yes.” He explained to me how the well was in need of repairs and that the community had liaised with different technicians to fix it, but the cost of repairs was a serious barrier. Patrick began telling me of the history of the well and how it served so many people in his densely populated village. With such high usage, of course the well had broken during the last five years, but the community was always able to collect funds to repair it. This time was different; the cost was nearly 1 million shillings, more than the annual income of three families combined. When the technician assessed the well and noted the cost, he knew the community would not be able to repair it on their own, so he reached out to UVP.

As I stood there speaking with Patrick, I saw several women and children pass by with empty jerry cans on their heads or tied to the back of bicycles. “Where are they getting their water since the well isn’t functioning?” I asked. He said, “There’s a well in the neighboring village, about an hour-long walk from here. But since there are many people that use it, the wait can be very long to fill your jerry cans. Some people just go to the exposed pond a few minutes from here to fetch water.” He looked at me with knowing eyes: open water sources like that pond were filled with bacteria that caused serious illnesses. But what other option did the community have? There was no question, he and I knew we needed to get this well repaired quickly.

In just a matter of days, we had the District Water Office technician in Kalungami working to repair the well. When people passed by, they excitedly asked when the well would be functioning again and chat among themselves in hushed and hopeful tones about the work in progress.

Finally, the day came when water flowed in the well again. The cheers were so loud! Patrick stood by, smiling at the small group witnessing the well return to life and I could tell that this meant so much to him. He walked up to me later and said, “Thank you for repairing our well. We now have safe water!” He laughed and returned to the jovial celebration at the renewed water source.