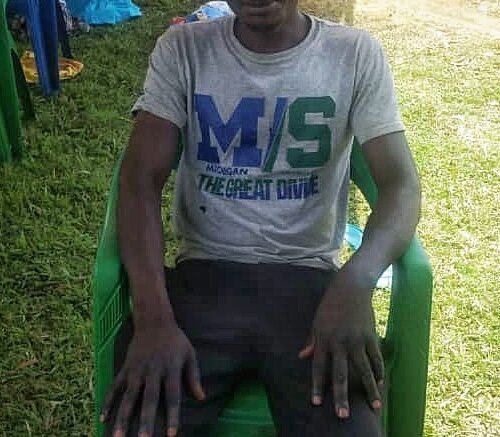 The collective global target, known as 95-95-95, sets the benchmark and agenda for HIV/AIDS eradication: 95% of people living with HIV know their HIV status, 95% of people who know their status are receiving treatment and 95% of people on HIV treatment have a suppressed viral load so their immune system remains strong and the likelihood of their infection being passed on is greatly reduced. To reach this target, we must ensure that everyone knows their status – and therefore reach them with HIV testing. For many individuals that UVP meets, participation at one of our outreach events marks the first time they have ever been tested for HIV.

Recently, UVP partnered with Busembatya Health Centre to host an integrated HIV, Malaria, and STI outreach event at a local mosque. It was here that community member Ivan graciously offered to tell us his story.

Ivan recalled hearing many radio messages explaining the HIV epidemic and offering guidance on how to get tested, yet he never found himself taking action. Fear, pride, anxiety — these are common feelings for those that have never tested. To Ivan, finding out he may be HIV positive was like issuing a death sentence.

It wasn’t until Ivan met UVP interns that he started to take a keen interest in our programs and HIV testing. He started regularly attending sensitization sessions led by the intern teams, asking for clarification when he didn’t fully understand the information being presented.

During our integrated program at the local mosque, Ivan nervously took his first HIV test. Fortunately, the result was negative. From that moment, Ivan pledged to live a “responsible life” – determined to avoid another “narrow escape,” as he called it.

On a path to end the AIDS epidemic by 2030, UNAIDS urges continued community engagement with high-impact HIV prevention and treatment services. It is also crucial that we specifically reach men with these services, directly combatting low male engagement across Uganda. Testing was a major milestone for Ivan, and a major shift in his view on how he can personally play a role in ending the epidemic. We hope Ivan continues to be an exemplary steward of public health and a champion of HIV prevention by supporting other men to learn their status.